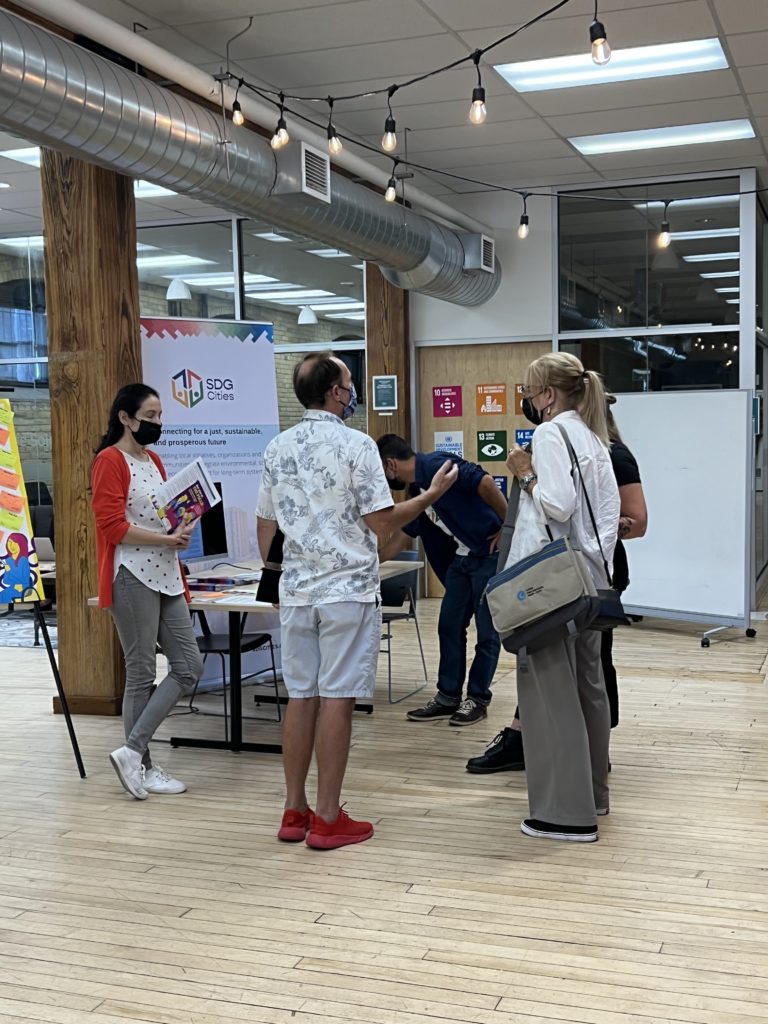 SDGs in the London 2022 Municipal Election

During the 2022 municipal election season, Pillar Nonprofit Network and SDG Cities London hosted and participated in several events to raise awareness about the crucial role that local governments play in addressing the most important challenges we are facing today. Each of these events also highlighted the importance of citizen participation in the democratic process aiming to increase engagement.

To guide this work, SDG Cities developed the SDG Municipal Election Toolkit where the UN SDGs are used as the unifying language to connect environmental, social and economic issues under a single framework. Using the SDG framework enables individuals from diverse groups working on different issues  to find ways to collaborate towards common overarching goals.

The main asset developed by the SDG Cities team for this toolkit was the Advocacy Guide that shows how each one of the 17 SDGs apply to municipalities, where local governments can act, and provides several examples of best practices from Canadian cities.

To animate the launch of the toolkit in September, a “SDG Municipal Election station” was open to the public at Innovation Works where people could browse the guide and other assets available with the toolkit, such as graphics for social media and sample messaging that could be freely used or adapted. You can see below some examples of how some of the social media assets were used.

Making the connection between municipal government and the issues citizens  care about the most is key for a long term commitment to a better city for all. After browsing the toolkit, one of the participants stated:

“I didn’t realize how much councillors have a say in a lot of both everyday and big picture issues.”

The toolkit launch event also included the launch of Pillar’s Project 51 London, which had a  goal to increase voter turnout in London municipal elections to greater than 50% by reducing barriers to create a “voting habit”. Project 51 London supported local community organizations to deliver election station simulations for their network.

The aims of Project 51 London aligns well with the SDG Municipal Election toolkit that shows the direct impacts of municipal decisions in our daily lives. During the voting simulation participants had a chance to share their main concerns. Housing (SDG11), homelessness (SDG1) and the climate crisis (SDG13) were the most cited ones. Others included sustainable transportation (SDG11), access to food (SDG2), mental health (SDG3), taxes (SDG17), cost of living (SDG8), racism (SDG10), arts and culture (SDG11), and digital divide (SDG9). Participants could then browse the advocacy guide to see practical ways that local governments can work towards solutions for those issues.

Thriving London was another initiative present at the event. The organization is a grassroots group supported by SDG Cities that distributed a candidate survey, outlining where candidates stand on major issues relating to the London Municipal Elections and published a scorecard for all candidates that answered the survey.

Finally the Urban League of London was also present to share about the All Candidates Meeting traditionally hosted by them.

After the launch, SDG Cities London wrote to all candidates who provided a contact email (89%). Thirteen candidates said they were hearing about the SDGs for the first time and in general the reception of the SDG municipal election toolkit was very positive. Now with the election results in and having 8 out of 14 brand new councillors, we have an opportunity to make the SDGs a bigger part of the conversation at City Hall.

Even though the main focus of our work is in London, the toolkit is a valuable resource for any municipality in Canada now and in the future. Because of that, we had a few other opportunities to participate in online discussions to talk about SDGs and local governments since 2022 was also a municipal election year all over Ontario, British Columbia, Prince Edward Island, Manitoba and Northwest Territories.

Some of those opportunities included the Tamarack SDG Localization Community of Practice, a brown bag lunch event for Impact Hub Ottawa and a class of the Sustainable Future Program at McMaster University.

With the majority of the global population living in cities, contributing more than 80% of global GDP and responsible for more than 70% of greenhouse gas emissions , cities play a crucial role in addressing the main challenges we face today.

The efforts during the municipal election season is part of an ongoing commitment to the SDG principles that require a whole-of-society approach and the integration of our economic, social and environmental aspirations.